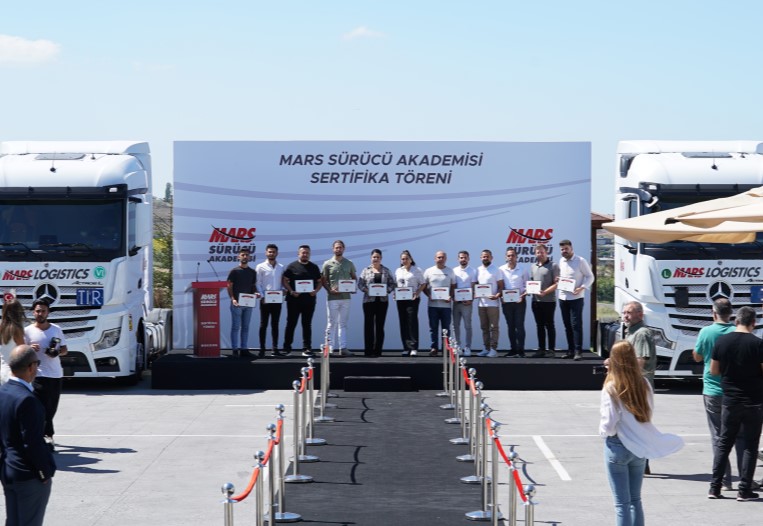 The Mars Driver Academy, a first in the sector, which was implemented in 2021 by Mars Logistics, one of the leading logistics companies in Turkey, gave its first graduates. At the graduation ceremony of the pilot group of 12, Mars Logistics managers presented the students with their certificates.

There are no requirements other than being at least 24 years old and having at least a Class B driver's license to join the Mars Driver Academy, where applications are accepted from young people who are interested in the profession of truck driver but do not have the necessary training and documents. The first group successfully completed the training and exams and started to work in the Mars Logistics fleet, which has a total of 800 drivers in Turkey and abroad.

With the project, it is aimed to become a truck driver, to provide jobs to young and enthusiastic female and male candidates who want to work in the sector, and to prevent the driver shortage experienced in the sector in recent years.

Speaking at the certificate ceremony held at Hadımköy Logistics Center on Tuesday, July 26, Mars Logistics Executive Board Member Erkan Özyurt stated that the project was started with the aim of both providing employment to young people who are interested in the profession of truck driver but do not have the necessary training and documents, and to prevent the driver shortage experienced in the sector in recent years. , explained the process of Mars Driver Academy as follows: “It is enough to have at least a class B driver's license to enroll in the academy. After the certificate completion process, we have theoretical and practical trainings on occupational safety and other operational issues. Successful students start work after this process. The certificate completion and training process takes approximately 6-7 months. We stand by our candidates throughout the journey. Thus, we start a journey together that we aim to be long-term together. We offer a career plan to our current drivers and driver candidates serving at Mars Logistics. First of all, our drivers, who have gained 1-1.5 years of experience in domestic routes, continue to work in our company as international spare drivers, and after gaining experience, they become able to travel alone on our international flights.”

Believing in gender equality, Mars Logistics supports the view that doing a job better cannot be determined by gender, and supports this view in the Mars Driver Academy,as well From the outside, it accepts the applications of female candidates to the academy, where truck driver training, which is argued to be not a woman's job with prejudice. Referring to this issue in his speech at the ceremony, Özyurt said that: “Within the scope of social responsibility, which we started with the Academy in 2021 with the motto of Equality has no gender, we are also training our female driver candidates within the scope of this program. We aim to increase the female workforce in all areas of our industry.”

Özyurt stated that the Mars Driver Academy project was not started only for the purpose of serving the institution and said that: “We have not only established the academy to serve our institution, but also aim to bring more knowledgeable and equipped new drivers to our country. Our drivers, who grew up with the corporate culture, represent both our country and our company. With this understanding, we aim to train qualified driver friends for our company and our country.” s

Arça Okşak, one of the female students who received a certificate at the ceremony and joined the Mars Logistics family, asked to speak after receiving her certificate and said: “After working as a cabin supervisor in the aviation industry for 12 years, a news I saw on social media caught my attention: Mars Logistics is waiting for female truck driver candidates. This idea was strange to me at first. How will you do it, how will you change the wheel, how will you go on the long road, I have received criticism such as the male profession. It was my family and Mars Logistics who believed in me unconditionally. From the very beginning of the program, they hosted us very well and were very interested. Labour would like to thank everyone who contributed."

With the graduation of the first group of Mars Driver Academy, the driver candidates of the second group were determined and the license and certificate completion period was started. The application and registration process continues for new groups.